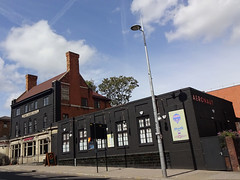 Pub in Acton. They have virtual reality facilities, and put on circus, cabaret, and comedy shows.

The pub was badly damaged in a fire on 1 January 2017, but reopened eleven months later. Before the fire, there was a microbrewery on site, but this has now gone.

Today, entry is into a large bare-boarded room with mismatched wooden chairs and tables lined up neatly. Decor and paraphernalia are not traditional, but rather in line with the aeronautical theme of the pub's name and the fairground/circus theme of its regular entertainments.

Bunting hangs from the ceiling, winding around a similarly-suspended large-scale model of an aeroplane, and the basket of a hot-air balloon stands in one corner. Parts of fairground rides are here and there, along with the "world's first robotic animation photobooth".

bob visited before the fire, at about 3pm on a Sunday afternoon in September 2014. There were a few customers outside in the beer garden and a couple inside. A large area to the side of the bar was closed. I had a pint of the Laines Porter (£4), brewed on-site. It was fine. The other beers were a range from the original brewery in Brighton and other London outposts. There was supposed to be a jazz band playing from 3pm, but they were still turning up while I was there.

Kake visited after the fire, on a Monday lunchtime in September 2018. Arriving around 1pm, I was the only customer. Chill-out music was playing, not too loud. Service was friendly and helpful, offering me a taste of the cider I was interested in and giving me a free side dish (either to compensate for temporarily accidentally overcharging me, or to make up for the dish I wanted not being on the menu, or both).

I initially thought they only had keg beers, but the bar has four handpumps tucked down the side. These were clipped for one ale and two ciders: Laine's Breaker, Snails Bank Elderflower Gin And Tonic cider (£4.50/pint), and Celtic Arches Thundering Molly cider.

As of September 2018, food is served noon-10pm Mon-Sat and noon-8pm Sun. Kake tried the Dutch fries (£6) and salt & pepper squid (£5) photo of both. The fries were good, served with cheese, spring onions, and paprika, and they'd put a second layer of this partway down to make sure all the fries were coated. The salt & pepper squid was disappointing, though; both squid and batter were bland, and the batter was greasy.

According to a leaflet seen in September 2014, there's a quiz every Wednesday at 8pm (though note that this was pre-fire, so we aren't 100% sure it's still going).

Accessibility: Two steps (no handrail) to get in. No further steps to accessible toilet but a step to the ladies' and gents'.