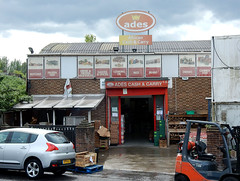 Although the name of "Cash & Carry" might suggest a solely wholesale business, this is also a retail shop open to the public. Storecupboard goods such as dried beans, oils, pounded yam flour, and gari are sold in large catering-sized packages as well as smaller sizes for home use. They also have seeds such as egusi and ogbono, and spices and seasonings such as uziza, large dried prawns, ground crayfish, and iru.

There's a butcher's counter too, and a small selection of fresh vegetables. It's worth noting that as of June 2015, the fresh African greens such as ewedu and scent leaf are delivered on Wednesdays, and may only be available for the few days immediately afterwards.

Near the checkout is a small (unrefrigerated) display of leaf-wrapped savoury steamed puddings. In June 2015, Kake tried the moi moi (steamed pureed bean pudding; £1.20 a piece, or £5 for five), which was pretty good. The moi moi itself had a smooth, soft texture and a subtle flavour with a hint of chilli heat, and the hard-boiled egg in the centre wasn't overcooked. I also tried the ukpo oka (steamed cornmeal pudding; £1/piece), which was nice and smooth.