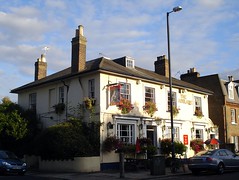 Inside, the decor is fairly traditional but not in an old-fashioned way. The floor is covered with a patterned carpet, and the seating is divided between church pew style banquettes and normal chairs. There's an armchair and a couple of sofas at one end, too. More seating is provided by a couple of picnic benches out the front and a beer garden at the back.

Kake visited on a Thursday early evening in September 2009. Four Shepherd Neame real ales were available; Late Red (£1.65/half), Spitfire, Master Brew, and Kent's Best. There was no music playing, but there were plenty of people in and it was pretty lively. Much of this was due to the large group in the back room, so it may be less lively normally. There were at least four dogs in as well, so it seems to be dog-friendly.

Food served lunchtimes (except Mondays) and evenings (except Sundays), according to the 2010 Good Beer Guide. The main printed menu looked like pretty standard pub food, but the specials chalked up on blackboards looked more interesting, for example moules marinieres (£8 including chips or baguette) and scrumpy pork hock with seeded crushed potatoes and fresh veg (£11), though in some cases a little culturally confused, for example red Thai chicken curry served with naan (£6.75).

Accessibility: Three steps up to get in. Once you're in, it's level to the bar, seating area, and ladies' (gents' not checked). Two steps down to the beer garden.