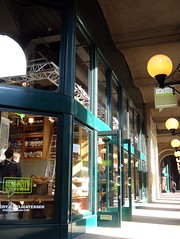 Deli/sandwich shop near London Bridge Station. It's been open for some years, but relaunched with a more modern look after a refurbishment in late 2010.

As well as hot food and sandwiches, they also have a tall island of shelves holding oils, vinegars, rice cakes, nuts and other snacky things, muesli and other cereals, biscuits, teas (including teapigs), jams, and so on. Most of their custom is takeaway, but there is some space to eat in (at a slightly higher price).

The queueing system is a little confusing at first glance, but appears to be divided into four separate queues for sandwiches photo, hot food photo, salads/wraps photo, and payment.

When Kake visited on a weekday lunchtime in March 2011, it was unsurprisingly quite busy a little after 1pm, but service was efficient and there wasn't too much of a wait. The food was packaged in card and paper rather than plastic, and napkins/cutlery were not automatically included (I didn't realise this, and ended up with nothing to eat my salad with).

Falafel wrap with hummous and salad (£4 to take away) wasn't bad; the falafel weren't freshly made, but they were heated in a sandwich press before being put in the wrap, and the whole thing was heated in the press again before being handed over. Beetroot salad (£1.40/100g) was a fairly straightforward mix of large chunks of beetroot, orange segments, and sliced onion; it is however notable that although I explicitly asked to buy 100g of it, the staff member dished out nearly twice that amount, so you may need to be careful if you're on a budget.

According to a post on the LondonSE1 forum, as of October 2011 they have a shelf full of books for swapping.

Accessibility: No steps to get in from the arcade in which it's housed. The arcade is three steps up from the pavement at the point immediately outside the entrance, but if you go a little further down Tooley Street there's step-free access into the arcade.