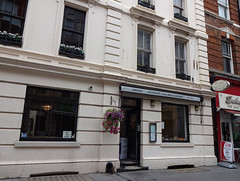 A Japanese restaurant in Bloomsbury, not far from the British Museum. They used have a sister restaurant (Abeno Too) off Leicester Square, but this has now closed.

The speciality here is the okonomi-yaki, which are a sort of pancake/omelette. The website has details about how they're made, but the hook is that they make them in front of you, on a hotplate in the middle of the table photo. Once the pancakes are made, they offer various sauces, dried seaweed or bonito fish flakes and then you can tuck in. All of these are left by the table so that you can add more. The menu is keen to point out the organic provenance of the meats photo.

On a visit in February 2008, Ewan and Sarah had the okonomi-yaki set lunch (Osaka Mix and Kiso Mix options) and were extremely pleased with it. The basic mix for the pancake was similar, but the topping on the Osaka Mix was slices of bacon, while the Kiso Mix had a mixture of mushrooms, lotus root and garlic (very carefully fried by the waitress) and melted cheese photo. Kat had rice with pork and chicken, which was cooked in the kitchen and brought out. The pork in particular attracted very positive comments. Service was attentive, and they were happy to bring out tap water. The roasted green tea was also very fine, not too bitter at all.

On a return visit in August 2008, the okonomi-yaki were every bit as good, though unfortunately the green tea was unavailable that day.

bob visited in September 2013 and also had the okinomi-yaki set lunch (£13). This included an okonomi-yaki photo, a side dish photo, and a bowl of miso soup photo. I also had a glass of mugi-cha (chilled barley tea; £1.80) photo.

Ewan's verdict: The food here is excellent value and extremely tasty, if somewhat filling. I'd be happy to visit again if in the area.