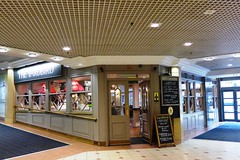 The Yardbird was a Greene King pub in the Broadway Shopping Centre near Hammersmith Station. According to the Oct/Nov 2018 London Drinker, it has now closed and the future of the premises is "uncertain".

Greene King pub in the Broadway Shopping Centre near Hammersmith Station. It was previously known as the Trout photo, but was renamed to the Yardbird in 2014.

Inside, polished floorboards give way to checkerboard tiling around the bar. There are at least two fruit machines. Most of the seating is at high tables, with limited seating (including a banquetted alcove) at normal height. It also has some outside seating, on a sort of patio thing set into the shopping centre. The ceiling is at multiple heights, and there's a mezzanine at the back which seems not to be in use.

On a Sunday afternoon in November 2008, it was fairly empty when Kake arrived a little before 4pm, but by the time I left a couple of hours later all the seats were taken. The only beer on handpump was Greene King IPA, though they did have Old Speckled Hen on tap (not handpull). A pint of Strongbow was £3. Although there's a flatscreen, it was silent on this occasion. Piped music was playing instead, at a level that allowed it to be ignored in favour of conversation.

On another visit on a Wednesday lunchtime in August 2015, there were quite a few people in around 1pm, some of them seeming to have settled in for an afternoon's drinking. '80s music was playing, again not too loud. The real ale choice was wider than last time, if not exactly better: Greene King IPA, Old Speckled Hen, and Greene King Churchill IPA. They also had keg taps for things including Goose Island IPA and Aspall's cider.

According to the Greene King website as of August 2015, food is served from 10am to 9pm, presumably every day. The menu is a fairly standard pub-food one, almost certainly chain-wide.

In November 2008, Kake's salmon bites (£3) photo were advertised as coming with red pepper and chilli dipping sauce, but actually came with sour cream. They were fine; almost certainly straight from packet to deep-fryer, but they were fried competently, and the salad on the side was dressed.

In August 2015, Kake tried the pulled pork sandwich (£6 on the daytime "deli" offer, including a side of coleslaw and a pint of lime and soda) photo. This was again fine without being anything special. The pork was OK if a little too sweet, and the bread was a decent wholemeal bloomer, but I wish they'd cut it in half to make it easier to eat. The side salad was drizzled with a very artificially-lemoney dressing — too unpleasant to eat really. The coleslaw was fine, though, made with a mix of different-coloured cabbage cut into reasonably-sized shreds.

Kake's verdict: This isn't really a pub with much character, and I wish the accessible seating wasn't so limited. It's handy for meeting people from the station, though, as it's fairly easy to find.

Accessibility: No steps to get in from the shopping centre. There's an accessible toilet next to the ladies', and there is step-free access to both of these. However, the ladies' is through two very heavy doors with a very small lobby space in between (Kake struggled to get through them with a full backpack). Gents' is up a flight of stairs. Most of the seating is at high tables.