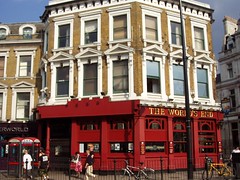 secretlondon visited one Friday in August 2015. The beer selection included their own World's End Ale (Shepherd Neame) and World's End Pilsner. A pint was between £4 and £5. The consensus of our group was that the beer wasn't very good. They also sell food although I didn't try any.

Accessibility: The ladies' toilets are down a small flight of stairs, but there may be an accessible toilet on the level. It was very crowded and I think you would struggle to get through if you were using a wheelchair. There was loud rock music.