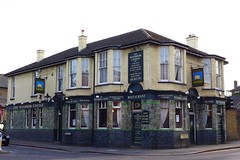 On a July 2019 visit Whitstable bay, spitfire and Bella birra (£4.20) were on. The scampi and chips (£10.25) was fine although I would have preferred the fries a bit crispier.

One area was set up for diners. Lots of wood paneling. There is a function room and a beer garden. Level inside to toilets although a few seating areas are raised. A step to getand it's a tight turn for both entrances.