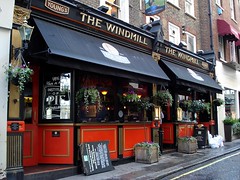 Young's pub in Mayfair, with a restaurant (or "pie room" as they bill it) upstairs.

Kake et al. have been coming here for years; it's a good, reliable pub which also serves good food. We used to use the function room for London Perlmongers, too (but stopped when they started insisting on a room hire charge). Never tried the restaurant, though, just the pub food. There's a second dining room down some steps to the rear of the pub as well.

It gets quite busy post-work; get here before 5pm if you want to be guaranteed a seat, particularly later in the week, and when the weather's not great for standing outside. Service is generally friendly and well-organised, and there are newspapers available for customers to read.

On our March 2008 visit, Bombardier was £3.05/pint, Deuchars IPA was £3/pint, and Waggledance was £2.70/bottle. (They usually have a couple of Young's beers in bottles, but it's never predictable which as they run out quickly — don't believe the list on the menu.) On our July 2008 visit, Waggledance (£3.10/pint) had replaced the Deuchars. We noted they also had Blackthorn cider on tap (this is quite unusual these days). Surprisingly, there were still a fair few seats left at just gone 6pm, but then it was a Monday.

On a May 2012 visit, Ewan found a number of Twickenham ales alongside the usual Young's selection. As it was a hot sunny day, there was plenty of space inside as most people were out on the street.

Accessibility: Single step of several inches at each entrance door. Men's and women's toilets are both up a flight of stairs; no sign of accessible toilets.