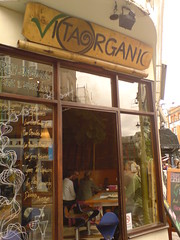 Previously known as VitaOrganic, it changed its name to Vitao in mid-2010. The system of serving food may also have changed — the comments below relate to a visit in August 2008, and we haven't visited since the rebranding.