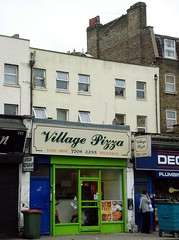 This was part of a small chain - a branch still exists on Tabard Street nearby. This branch has closed and was replaced by [Lebanese Kitchen, SE1 5UB]?.

They have over 50 different pizzas on the menu, including 20 vegetarian choices (some of which feature mock meat like mock pepperoni, mock chicken, etc).

You can order and pay online at Just Eat.