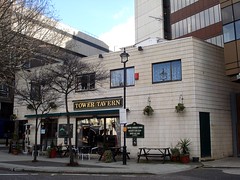 A pub in Fitzrovia, near the BT Tower.

There's something about the outward appearance of this place — somewhere between toilet block and estate pub — that makes it almost appealing. It may not be the most atmospheric pub inside, but it's spacious and airy, with wooden tables, and a raised seating area at the back, and it never seems too busy.

There are three handpulls and the ales are well-kept. On Ewan's October 2008 visit, Greene King IPA and Bonkers Conkers sat alongside the guest St Austell Tribute (which was off, unfortunately). Otherwise, the usual selection of lagers and wines were available. On bob's March 2010 visit, a pint of lemonade and lime was £3.

Food is available; as of March 2010, the menu is a fairly standard pub menu, with mains priced around £5–7.

It's far from being a bad pub, and for the area, it's probably your best bet if you don't want anywhere too loud and claustrophobic.