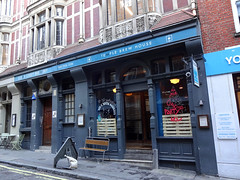 Basement bar with microbrewery, just off the Strand, in the Good Beer Guide.

It's a decent-sized space, bare-boarded underfoot and with a mix of unfinished plastering and neat stencilling on the walls (the latter showing an infographic of how beer is made). The on-site microbrewery can be seen through a window in one corner. The ceiling is low, made to seem lower by all the things hanging from it: dried hops, bunting, playing cards, porcelain jugs, and even a bicycle. Seating is a mix of low stools, mismatched chairs, half-height booths, and banquettes. Lighting is generally dim, though directed spotlighting allows people at tables to see what they're drinking.

Kake visited on a Friday afternoon in November 2018. There were eight or nine other customers when I arrived a little before 3pm. The flatscreen was showing tennis with the sound off. Music was playing, relatively interesting, slightly louder than ideal for conversation.

According to the Temple Brew House website as of September 2018, food is served noon-10pm Mon-Sat and noon-9pm Sun; and under-18s are not allowed.

Accessibility: Three steps from the street (no handrail), then a flight of steps with a landing in the middle and a handrail on one side. Another step to the toilets from the bar/seating area.