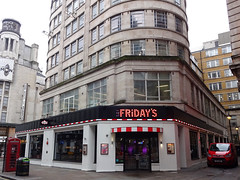 Average branch of this multinational chain of American-themed restaurants, near Piccadilly Circus.

Seats were readily available on a Tuesday evening, and the service was friendly and attentive. The food served was below average in quality and poor value (£8-12 per main, as of September 2007). After some discussion with the kitchen, a very small subset of the menu was identified as being free of gluten. Vegans had probably best steer clear. Reasonable disabled access.