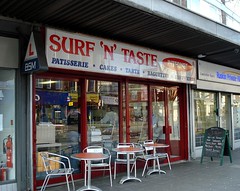 A Moroccan cafe and takeaway on Camberwell Road in Walworth near where it becomes Walworth Road.

There are a few tables on the pavement outside so you can smoke if you want to.

secretlondon went there in August 2008. They do a variety of sandwiches and cakes and some hot and cold drinks. She had a pot of Moroccan mint tea (£1.50) and a slice of cake (&pound1). Football (Arsenal vs Fulham) was on a large TV and the rest of the cafe were watching it and talking excitedly in Arabic. A handful of people were using the computers (though as of April 2009, the computers are no longer there).

In common with Ranya Cafe this is a place to hang out not just a place to eat in. It felt like a pub for those who don't drink.

They offer sharwarma and Moroccan tea. secretlondon's mint tea arrived in a silver coloured metal pot which needed to be held with paper napkins. I was also given a small glass to pour it into. It had 'bits' in and was nice. The cake was dry, but it was one of those cakes that is designed to be dry. They had gateau-like things too.