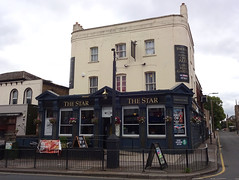 Pub in Wallington, very near the station.

Previously an O'Neill's, it was acquired from Mitchells & Butlers by the Stonegate Pub Company in October 2010, and then refurbished and relaunched as the Melbourne (a name it has had before) in February 2011 under Stonegate's Great Traditional Pubs sub-brand photo. It was renamed again to the Star in Spring 2017.

Entry is into an area with plenty of standing space, though a few high and normal-height tables are provided around the edges and on a dais off to one side. Flooring is a mix of dark-varnished wood, patterned carpet underneath the tables, and some attractive geometric tiling leading through to the back room. The lighting is a bit of a mish-mash, with chandeliers in two styles — one modern, one traditional — as well as suspended lamps in two different modern styles. Vintage photos of the local area hang on the walls, interspersed with flatscreens.

The back room is larger, and again provides as much standing space as seating space. Two pool tables are here, as well as a door leading out to a covered beer garden.

Kake first visited on a Monday afternoon in August 2011, in the company of bob. There were quite a few people in for 4pm on a Monday. Music was playing, mostly classic rock, including some Beatles. The flatscreens were showing cricket (with the sound on, but not really audible over the music).

There were either two or three real ales on; London Pride (£2.85/pint) and Marstons Pedigree were definitely on, but it wasn't clear whether the Timothy Taylor Landlord was or not, since the clip was turned around on one bank of handpumps but not the other. The Pride was OK but not notably well-kept. A pint of lime and soda was £1.25.

Kake visited again on a Monday morning in June 2018. There were no other customers when I arrived shortly after their opening time of 10am, but a couple more turned up within the hour. The flatscreens were switched off, but music was playing, not too bland and not too loud. Service was a little checked-out, with the staff member on duty paying more attention to their phone than to their customers.

This time the handpumps were clipped for Wychwood Hobgoblin, Hobgoblin Gold, and Sharp's Doom Bar at least (there was another bank on the back bar that I didn't get a close look at). A pint of lime and soda was £1.

Food is served, apparently all day, from a fairly standard pub menu including a few vegetarian options and a separate (small) section of "non-gluten-containing dishes".

They have free WiFi via MySmartWiFi, which requires registration but doesn't check whether you've used your real email address.

Accessibility: A shallow ramp to get in. Step-free throughout, except that a small amount of the seating is on a dais. Ramp to the beer garden. There's an accessible toilet which doubles as a second ladies'.