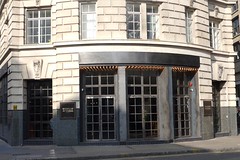 This is a large, spacious single room pub, with bare floors, glazed tiles on the walls, a U-shaped metal bar with barstools to the rear photo, and large tables alongside the windows on both sides of the room photo. The space in front of the entry doors is kept clear of tables, perhaps anticipating a crush of people on busy weekday work nights. On a mid-afternoon Wednesday visit, the space is fairly empty, with a wide choice of tables available, although music is playing at a not insignificant volume.

The bar has four hand-pulls for a constantly changing selection of real ale (on our March 2015 visit, there was something by Burning Sky, Siren, Gipsy Hill and one other). There are also around 20 keg taps, with the full range of Camden Town core beers (from £4-£4.50/pint), one for Mortimer's Orchard cider, one for Lagunitas IPA, and 12 taps for guest keg beers. An extensive menu (available on the website) lists these as well as a good range of bottled beer photo of beer menu. In addition, there are wines and spirits covered.

It's hard to judge how successful a pub is on the basis of a single mid-afternoon visit, and given its location it would not be surprising if it got particularly busy on weekday nights. Barworks pubs tend towards being loud, raucous environments at such times (great for those looking for such a place), and Singer Tavern looks to be no exception. However, visiting at an off-peak time on a sunny day, this is a pleasant environment to stop for a drink, and the drinks range is excellent. Staff were very friendly.

Accessibility: One step to get in. Toilets are located downstairs, though it looks as if there is a disabled toilet on the ground floor towards the rear (it is unsigned, so may be best to check with bar before visiting).