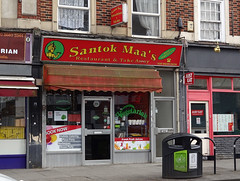 The decor and ambience are cafe-style, and it seems to be fine to come in just for a drink. It's quite small, seating about 30 at black wood-style veneer tables with hoop-backed black plastic chairs. The floor is cream and red tiles. The walls are painted dark orange and yellow, and hung with Indian art and signed photos of cricketers.

Kake has visited several times now. On a Thursday lunchtime in March 2016 there were three other customers in when I arrived around 1:30pm, apparently regulars, and several more arrived while I was there. On a Tuesday lunchtime in August 2018 there was one other customer when I arrived around 12:45pm, and a distinct smell of incense in the air. On a Thursday afternoon in October 2018 there were seven others in at 2pm. No music was playing on any of these visits; the radio was on, but too quietly to hear properly.

Pani puri (£3 for six in March 2016) photo were mostly structurally sound — only one of them leaked — though very slightly staler than ideal. The pani was sufficiently tangy and spicy, and not too sweet. The solid fillings consisted of chickpeas and potatoes, and I wished for a bit of raw onion to liven it up a bit.

Accessibility: A tiny step (more of a ridge) to get in. Toilets up three steps then down a very narrow corridor made even narrower by having stuff stored all along it (on our visit, to the point where we had to turn sideways to get through).