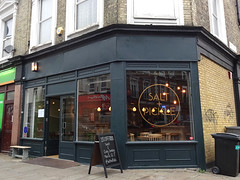 Salt & Pickle was a wine bar and restaurant in Crystal Palace. It closed for good in February 2018.

Wine bar and restaurant in Crystal Palace, specialising in pickled, cured, and otherwise-preserved things. It opened in June 2017, originally under the same management as (now-closed) Good Taste deli just down the road.