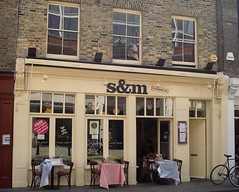 Cafe/restaurant on Brushfield Street in Spitalfields. It used to be part of a small chain, but as of late 2011 this is the only branch left.