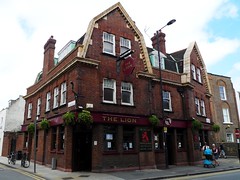 A traditional pub in Stoke Newington, with intact Truman's tiling. Formerly called the Stoke Tup, and before that it was a trendy place called the Magpie and Stump with sawdust on the floor.

Prior to the refurb, it was mostly a sports pub with a big screen, but it did have real ale and interesting events upstairs, including acoustic nights, contemporary jazz, and comedy. We haven't been since the refurb, so we don't know how much if any of this has survived.

It has a small garden.