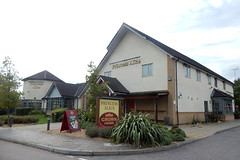 The Princess Alice was a pub and restaurant in Thamesmead. It has now closed.