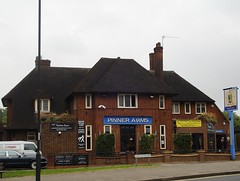 Greene King pub in Pinner. It's fairly large inside. There's at least one sofa (large, squashy, and leather), and there's a pool table too. The car park has a stand-up smoking shelter, but there's also some nice enough covered-over seating along the side of the pub.

Kake visited on a Thursday afternoon in May 2009. Although there are three handpumps on the bar, the only real ale available was Greene King IPA (£1.25/half). A large packet of Quavers was 60p.

There were about half a dozen other customers in. A few flatscreens were showing cricket with the sound off, and music was playing quietly in the background (instrumental jazz, country music, Irish music, Bee Gees.)

Accessibility: Step-free access to the bar, toilets, and some of the seating area.