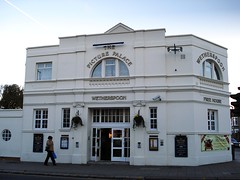 Wetherspoons pub in Ponders End, situated in a converted cinema. It's been in and out of the Good Beer Guide a couple of times. Opens at 9am for breakfast (and is licensed to serve alcohol from that time). Food served until 11pm every day.

Note: According to the Feb/Mar 2016 London Drinker, Wetherspoons have sold the Picture Palace. It's not clear whether it will remain open.