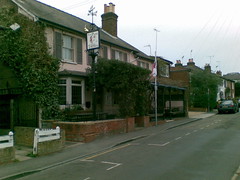 Northern Steve visited on 26th November 2008 and had an acceptable London Pride (£3.20/pint). He neglected to note the other beers on.

Comment added by Anonymous: This pub is past its sell by date, Terrible hard wooden benches for seating.The beer is good but vastly overpriced, we paid £3.60 for a pint. No food. Male dominated clientele. One to avoid. Expensive and uncomfortable.