Blog
Contact
About
(redirected from The Old Dispensary, SE5 0TF) 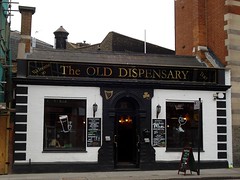 Small pub on Camberwell New Road near Camberwell Green. It's been through a few incarnations over the years. Pre-2008, it was a gastropub selling burgers and steaks; in 2008 it reopened under new management with an Irish theme and Thai food (see old version of this page for more details); and in 2013 it underwent another management change which saw the introduction of American craft beers.

A small area at the front has green leather sofas and a log-burning stove. Further in near the bar is a dramatic hexagonal skylight and a chandelier, and right at the back is a dark, cosy area with a single table and a piano; this appears to be used for live music from time to time. At least three flatscreens are mounted around the pub.

When Kake visited in June 2016, there were two handpumps on the bar, clipped for Sharp's Doom Bar and Greene King IPA. A pint of lime and soda was £1.20. It was fairly quiet during most of my visit (around 3pm-5pm), though there were a few other customers in at all times. Music was playing, fairly interesting, not too loud. Around 5pm, they put the football on the flatscreens, more people started to arrive, and it got somewhat noisier.

As of June 2016 they don't do any food, except sometimes burgers when the football's on. However, they're fine with you bringing in a sandwich bought from somewhere else.

They have free wireless; as of June 2016 the network ID is on a board near the bar, and the bar staff will give you the password.

Accessibility: A large step to get in. There is an accessible toilet with hand rails.