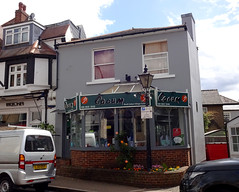 Keralan restaurant in East Molesey, near Hampton Court Station. They also do takeaway and delivery.

It's a small space, seating only around 30 people at linen-covered tables flanked by tall-backed chairs. A large bay window at the front offers plenty of natural light to the three tables therein, while further in it's slightly darker and cosier. Another room at the back offers more seating, but seems to only be opened at busy times.

The floor is polished wood, recessed spotlights dot the ceiling, and the walls are decorated with paintings, carvings, and other art. A painting of Ganesha is on one wall, and a statue of Krishna stands in an arched nook nearby.

Kake visited on a Monday lunchtime in July 2017. There were no other customers when I arrived just after their opening time of noon, and this remained the case when I left around 45 minutes later. Peaceful music was playing, not too loud, and an incense stick was burning in one corner.

Oothappam (£6.50) photo was a bit tough — the heavily browned base suggested it was cooked a little too long — and not quite as fermented-tasting as I'd have liked. There was only one (coconut-based) chutney on the side, and both this and the sambar had very mild spicing. Overall, though, it was fine.

Service was fine. Tap water was poured from a chilled jug and replenished on request. No service charge was added to the bill.

Accessibility: Three steps to get in. Toilets are up a flight of stairs with a sturdy handrail that swaps sides halfway up.