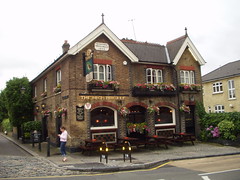 Young's pub in Balham. The decor is quite traditional, with frosted glass windows, a carpeted floor, banquette seating, and displays on the walls documenting all the charity walks organised by the pub over the years. The space is broken up by a few pillars. There's a few picnic benches outside at the front, and a largish paved patio/beer garden area to the rear.

bob visited on a Saturday in June 2007. I had a very good pint of Young's Special at £2.80, probably the best I've had a for a while. The food was also very good. The steak and mushroom pie (£8) was very tasty and probably homemade. The vegetables were very tasty as well. Spotted dick (£5) to follow was tasty and very light.

The rest of the menu was also relatively standard for a pub; fish and chips, steak, and burgers. One interesting option was the brunch burger, with extra sausage, bacon, and fried egg. If you get the sausages and mash, 10% is donated to charity.

Kake visited a couple of years later, on a Wednesday afternoon in June 2009. Real ales available were Young's Special, Young's Ordinary, Waggledance (£1.52/half), and Bombardier. There were a fair few people in, and everyone seemed to be having a good time, with animated but not rowdy conversations going on all around. There was no background music, but a TV was showing tennis with the sound on quietly.

According to a sign seen outside in June 2009, food is served noon-10pm every day, and children are welcome until 9pm.

Accessibility: A shallow ramp to get in, and uneven pavement outside. One step up to get to the ladies'. An anonymous commenter tells us that there are "toilets for the disabled", but we haven't confirmed this.