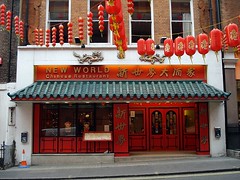 Note: The New World was closed by order of Westminster City Council in July 2011 due to food hygiene violations, but as of September 2011 it's open again.