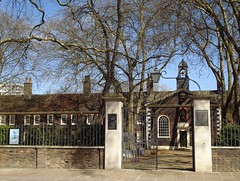 Historical version 11 of Museum Of The Home (view current version)

Note: The museum is temporarily closed for refurbishment until late 2020, when it is due to reopen under its new name.