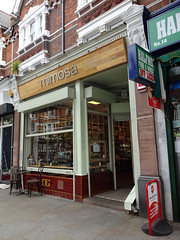 Cafe and delicatessen in Herne Hill, part of a small chain.

They serve a regular made-to-order sandwich menu augmented by a daily sandwich special and a rotating selection of soup plus three or four hot dishes. All is available to take away as well as eat in. They also have small savouries such as samosas, mini quiches, and savoury muffins, as well as sweet patisserie items such as macarons. Fridges hold interesting soft drinks, bottled beers, wines, and liqueurs (though we're not sure if they have an on-licence), and Italian groceries are stacked on the shelves.

Inside seating is limited to two small tables plus half a dozen low stools at a waist-high counter running around the inside of the bay front window, but they also have a small garden with five or so tables.

Kake visited on a Thursday afternoon in August 2016. There were two or three other customers in when I arrived around 3pm, and a few others were in and out while I was there. No music was playing, but the hum of the fridge was fairly loud. Service was friendly and helpful.

A ham and cheese muffin (£2.65 for eat-in) photo was light, pleasant, and savoury, not too doughy, and with a slight hint of sweetness that worked well with the saltiness of the ham and cheese. A pot of lemongrass and ginger tea (£1.50) was generously-sized and quite tasty.

They have free WiFi, with the network name and password on a piece of paper by the till.

Accessibility: A small step to get in, and a fairly high ridge (just over a couple of inches) to the garden. Not sure if there's a customer toilet.