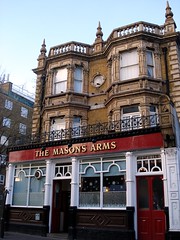 The Masons Arms was an Irish locals pub on East Street in Walworth. According to the June/July 2012 issue of London Drinker magazine, it closed in or before March 2011.

secretlondon visited in September 2008 and had a Guinness (£1.10/half at Happy Hour prices). There were hand pumps but they were not connected.

It had a sign saying no children after 6:30pm and that there is a disco on Friday nights. There was also a sign selling toasted sandwiches for £1+.

There are tables and chairs outside.