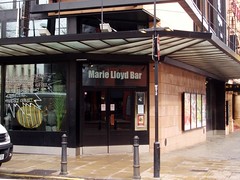 The Marie Lloyd Bar was a bar attached to the Hackney Empire in Hackney. It closed in early 2011, with the premises being taken over by the Empire Cafe.

It has a late licence, live music, including new bands night on Wednesdays, and a good DJ on Thursdays.

There are seats out the front, facing the square.

They also do some food.