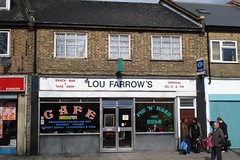 Lou Farrow's was a cafe and pie & mash shop on Southwark Park Road in Bermondsey. It has now closed. According to the LondonSE1 forum, as of early 2016 the premises have been gutted out but it's not clear what will be opening there next.

Pie and mash shop on Southwark Park Road in Bermondsey. It also does normal cafe-type food.

You order from the counter; there are two separate order areas depending on what you want. It can seat around 40 people on fixed tables and chairs.

As of November 2009, double pie and single mash with liquor is £3.25, and a bottle of Lucozade Orange is 85p. The pies are very tasty, and the brown sauce is tasty too. They also do eels.

The cafe menu has about eight set breakfasts including a vegetarian one. There are two daily specials which normally seem to be some variation on meat chop with vegetables.