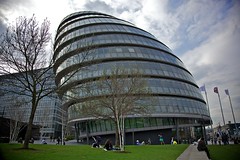 London's Kitchen Cafe was a cafe in the basement of the old City Hall near Tower Bridge. It has now closed, as City Hall has relocated to the Royal Docks.

Cafe in the basement of City Hall, previously known as Just Deli.

Despite its location, it's open to the public. You have to go through a security check which involves having your bag scanned and walking through a metal detector.

The food is canteen style with hot food and apparently salad sold by weight. secretlondon visited with a colleague one lunchtime in May 2010. I had one of the hot dishes - roast lamb with a choice of two sides for £4.60 photo. I also had a banana for 55p.

There was only one till and tables which overlooked the Scoop (outside concert venue). The food was nice and good value and I will certainly go back.