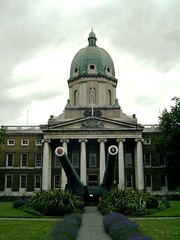 An excellent museum focused on modern war and warfare, near Lambeth North Station. It underwent refurbishment in early 2014 but is now open again.

It is housed in the building which was formerly the Bethlem Royal Hospital (or "Bedlam"). (There are other outposts of the Imperial War Museum in Manchester and Duxford. It also runs the Cabinet War Offices and the HMS Belfast.)

Entry is free (but donations are encouraged). They have special exhibitions (such as one on World War I in 2014) which are also free, but for which you may require a timed ticket.

The exhibits are based around twentieth-century conflicts, especially World War II, and the many items in the collection are well-researched and presented in context, including such things as a whole house from during the Blitz.

There is a cinema, unsurprisingly focusing on war-related films. There's also a cafe on the western side of the main hall, opening out to (uncovered) tables overlooking the adjacent Geraldine Mary Harmsworth Park, which can get busy with families on the weekend.