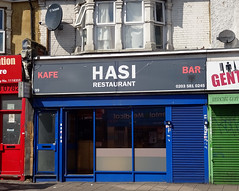 Inside, it's a long narrow room seating around 70-80 people on a combination of padded purple banquettes and upright wooden chairs. The floor is wood, and the walls white, punctuated by dark burgundy faux-pillars. Tables are covered with thin red fabric cloths, protected by clear plastic toppers under white paper cloths. Napkins are similarly paper. There's a DJ station to one side, and a fully stocked bar at the back. An open space in the centre of the room suggests there may be dancing.

Kake visited on a Friday lunchtime in September 2017. There were no other customers when I arrived a little before noon, and indeed the staff seemed surprised to have a customer at all. One other did turn up while I was there, seemingly a regular. No music was playing, but a flatscreen was showing the news in (presumably) Albanian with the sound on.

There doesn't seem to be a menu, but I was offered choices of lamb, rice, beans, and soup; I asked for lamb and rice and was offered a further choice between lamb chops and "fried in small pieces". I chose the latter (£5 including both lamb and rice) photo.

The lamb was good, flavourful and well-fried to the point of crispiness in places without becoming tough. The rice was cooked fairly soft, and flavoured with a decent lamb stock with just the right amount of fat. It was a generous portion, but so tasty that I ended up finishing it all despite initially being a bit sceptical that a plate of plain meat and rice would hold my interest for long enough.

Accessibility: A large step to get in, with no handrail. Toilets not checked.