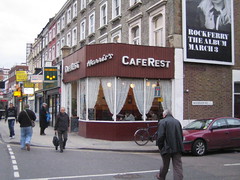 The information below is retained for people who want to know what it used to be like as Harris's.

This is a very traditional cafe on Goldhawk Road, near Shepherd's Bush Green. The menu is meaty, and the specialties are often Greek dishes. Mainly single people, mainly single men. The atmosphere is friendly.