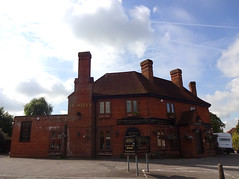 secretlondon visited for a quick half after work in October 2016. They have 3 handpumps but 1 was off. They had London Pride and Timothy Taylor Landlord. My half of Landlord was £1.75 but was flat and cloudy.

I felt it was a bit shabby. They have a beer garden (unchecked), a fruit machine and 1980s music in the background. They have a separate restaurant which I didn't look at. According to posters they have regular pub quizzes, sports and music events.

Accessibility: There are two steps to enter the pub but the toilet cubicles are on the ground floor and are quite wide.