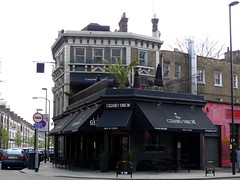 Grand Union was a chain bar & grill behind the Imperial War Museum in Lambeth. It has now closed and been replaced by a pub in the Draft House chain, under the name of Tankard (a name which it has had previously).