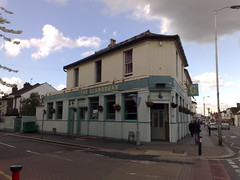 The food was good by pub standards, and not unreasonably priced. It was the second day of a new menu on the evening of our visit. A starter of salmon and scallop terrine was served slightly too cold, but the flavour of both ingredients came through nicely. It was perhaps a little dry, but a small pot of home-made tartare sauce made up for that. It also came with a few leaves of rocket and a wedge of lemon. We got a free helping of toasted sun-dried tomato ciabatta before the main courses arrived, with a dip containing a fruity sticky sauce of some kind underneath a layer of clear oil. The main courses we chose were all from the short specials list: fish and chips (£9) was a decent size portion, and came topped with a handful of parsnip crisps. Salmon tagliatelle (£8) was about as simple as that dish can get, but perfectly acceptable despite its lack of sophistication. A 10oz rump steak (£13) came with mushrooms, home-made unpeeled chips and fried mushrooms. The steak was perfectly cooked, and quite tasty. We tried their homemade baked "vanilla bean cheesecake" for dessert. Served with tart mixed berries and a sprig of mint, it was good cheesecake. I have no idea how much it cost, as it wasn't on the menu and they didn't charge us for it. There is a completely separate lunchtime menu, including Bunny Chow, which can only be a good thing.