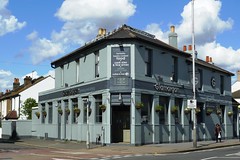 The Glamorgan was a pub near East Croydon Station. It closed down in November 2016, and by July 2017 there were signs up indicating it was due for demolition.

According to a commenter (Rona, January 2013), there's a pub quiz every month, though it's not clear on what days (at least one of them is on a Sunday at 5pm) with £3 entry per person, max 6 people per team. More information from miketully@tiscali.co.uk

elvum's verdict: Overall, I think that this may be the best pub near East Croydon station, and for food, quite possibly the best pub in Croydon bar none. I confidently expect to see it in the next Good Beer Guide. (Update following second visit: lack of space for drinkers can be a little annoying when the pub is busy, and the number of real ales on tap had decreased to two. Still a good pub though.)

August 2016:cronx nectar £3.50 doom Bar and Wainwright. Still tables reserved for diners. Step to get in. Level to toilets