Blog
Contact
About
(redirected from Duke Of Edinburgh, E11 2EY) 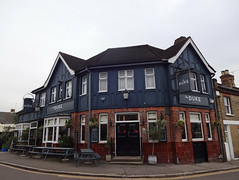 Pub in Wanstead. It was previously known as the Duke of Edinburgh photo but was renamed after a change of management in late 2013.

We haven't visited since the change of management (except on a day when they turned out not to be open), so some or all of the below may be out of date.