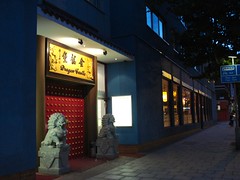 We had great trouble getting here; we spent quite a lot of time wandering around lost in the subways underneath Elephant and Castle roundabout. Be prepared. If you're coming on the tube, it's best to leave using the Northern Line exit, orientate yourself using the maps on the bus stops, and then stay above ground near the roads until you need to enter the underpass under the "southern roundabout".
Last visited by bob, Nick and others on Monday 15 Nov 2007. Opening hours taken from a business card on a previous visit.
OS X co-ord: 532132 OS Y co-ord: 178607 (Latitude: 51.490977 Longitude: -0.098175)
This is version 8 (as of 2007-11-15 18:30:19). View current version. List all versions.