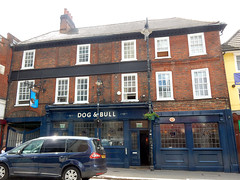 Young's pub on Surrey Street in Croydon, in the Good Beer Guide.

It's very traditional (in a real way, not in a fake way), and has a large beer garden out the back. It's situated right on Surrey Street Market, and during the day the market traders' shouts of "pound a bowl" can be heard from inside the pub.

The main bar area at the front has standing room and bar stools both at the bar and at high tables by the front window. The floorboards here are bare, while another area to the right of the bar has large patterned rugs on the floor and a leather chair in the corner. There's another small alcove-like room at the back, and a bookable function room upstairs. Tables and chairs are dark wood, and the walls are half-panelled.

On Kake's July 2011 visit, the real ales available were Young's Bitter, Young's Special, and Waggle Dance (£1.65/half). There were three or four people in at 3pm on a Monday. On another visit in February 2012, the ales included Winter Warmer (£3.45/pint), and the place was quite full at a little before 6pm, with drinkers lining the bar and only one or two free tables. No music was playing on either of these visits, though there is a jukebox which is sometimes in action. By January 2013, however, Winter Warmer was £3.60 a pint and the pub almost empty on a weekday evening. Let's hope this was just a one-off abberation.

According to their website as of October 2013, food is served noon-2:30pm and 5pm-8pm on weekdays, and noon-5pm on weekends photo of Sunday menu as of the same month.

On a June 2015 visit bob and Martin had the pulled pork bun(Ł6.25)photo and the smoked beef brisket bun(Ł6.50)photo and 2 portions of "rustic fries"(Ł3)photo. The bbqed meat was very good and the brisket is the best of them. The beers available were Young's Bitter(Ł3.50), Young's Special(Ł3.65) and Truman's Lazarus.