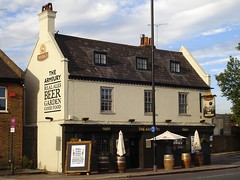 It was previously known as the Armoury (pictured), but according to the Oct/Nov 2016 London Drinker it was refurbished and renamed to the Crane in September 2016. We haven't visited since, so some of the details below may be out of date; in particular, the London Drinker report states that Young's ales are now available.

The frontage features some rather nice leaded windows with stained-glass detailing. The pub sign photo is also worthy of note, with its embedded cannonball.

Inside, there are a couple of distinct areas, though no dividing walls between. Directly around the bar is a standing area which also features blocky high tables and stools.

The other side of the pub has more seating space and less standing. Two sofas face each other across a low table by the front window, and a couple of high-backed armchairs sit together next to the open fire (which for some reason has "open fire!" written on the wall next to it). Here are also a number of large square tables, with mismatched upholstered-seat wooden chairs. A flatscreen is mounted above the fireplace, and recessed spotlights are set into the ceiling. The wooden flooring gives way to stone flags towards the back of this area, and right at the back a rather bizarrely-treated sideboard holds various condiments (presumably the designer was aiming for "distressed", but it actually looks more like "vandalised").

The outside seating area at the back is more of a yard than a garden, fairly concretey and lacking in flowers, though handily for the smokers some of it is under cover.

Kake visited on a Wednesday early evening in September 2012. There was only one real ale on — Sambrook's Wandle (£1.65/half) — though Oxfordshire Marshmellow was marked as "in conditioning" (i.e. coming soon). My half was served in a stemmed glass. Interestingly for a Young's pub, there was no Young's beer; the landlady told me that this was because none of their customers particularly wanted it.

There were no other customers when I arrived around 5:30pm, and this remained the case throughout my short visit. The flatscreen was showing the news with the sound off. Music was playing, reasonably interesting rather than bland. Service was friendly and chatty.

According to their website as of September 2011, there's a quiz on the first Thursday of each month and a poker night every Wednesday. (Note however that as of September 2012, said website is no longer functioning, so it's unclear if these things are still going on.) Signs spotted in September 2012 advertised DJs every Friday night and live music every Saturday night.

As of September 2012, food is served lunchtimes and evenings every day photo of the lunchtime specials board.

Accessibility: No steps at either entrance, but the one at the front has a small shallow ramp and some tight turns, while the side (right-hand) entrance just leads straight into the pub. It's step-free to the bar, seating, and toilets, though the corridors to the toilets are a little narrow and getting to the ladies requires turning a corner in these. Also step-free to the garden, with just a ridge at the threshold (the left-hand exit to the garden, with the double doors, is smoother than the other).

Child-friendliness: The 2012 Good Beer Guide states that families are welcome.