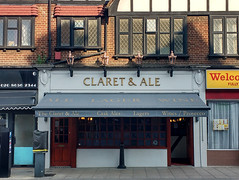 Pub in Addiscombe, in the Good Beer Guide. It's the sister pub of the Claret Wine Bar in Cheam. Previously known as the Claret Free House photo, it changed its name to the Claret & Ale in 2016 or early 2017, though nothing else about it seemed to change.

It's quite small, stretching back from a single frontage in a shop parade just down from Addiscombe Tram Stop. Decor and ambience are traditional.

We've visited several times now, most recently in June 2018. On a Saturday afternoon in August 2007 it was just the right amount of full, with enough room to sit but enough other customers (many of whom seemed to know each other) to create a pleasant buzz of conversation. Football on a flatscreen was briefly interrupted in favour of horse racing on a couple of small TVs, but neither was obnoxiously loud. About half of the customers were watching the sport, and occasionally shouting at it.

On a March 2008 visit by Ewan et al., the pub was busy in the early evening of a public holiday, though there were still some tables down the back of the pub where we got a seat. There was no sport playing at the time. When bob visited in August 2016 there were about ten people in and the flatscreens were showing cricket and golf. On Kake's Wednesday afternoon visit in June 2018 there were again about ten people in, but on this occasion the aural entertainment alternated between goth, Frank Sinatra, and the horseracing.

In August 2007, Westons Herefordshire County Perry (4.5%) was very pleasant at £2.80/pint. Biddenden Dry and Medium (both 8%) were also on, and also £2.80. Many real ales too. The perry was fetched from the cellar, which is just at the back of the single room that makes up the pub. In March 2008 the ales were Palmers bitter, Palmers 200 (a stronger bitter), Slaters Queen Bee, Ossett Brewery's Excelsior and Fine Fettle, and Spitfire. They also had the ciders mentioned above (still at £2.80) and a good whisky list (all at £2.10). Beers were well-kept, with particular praise for the Queen Bee.

They don't do any food, but the snacks behind the bar include Scampi Fries and other such delights.