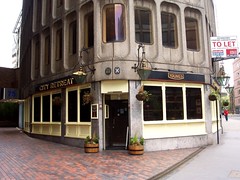 A former Young's pub, now reported as boarded up as of January 2013.

bob visited on a Thursday evening in June 2008. It was relatively quiet, even though there was a group in obviously celebrating something. An okay pint of Young's bitter was £2.90.

Accessibility: Access to the pub itself is step-free, but the toilets are downstairs.