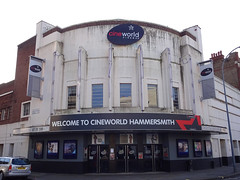 Cineworld Hammersmith was a small four-screen cinema on King Street in Hammersmith, next to the Town Hall. It closed down in April 2016; according to its website, this was due to having been served notice by its landlord. The building is due to be demolished.

Small four-screen cinema on King Street in Hammersmith, next to the Town Hall.

Maybe the other auditoriums are better — but at least in screen 2, the sound system isn't up to the job, the screen is small, and the seats are rather narrow, with rigid cup holders to dig into your thighs and make you even more uncomfortable.