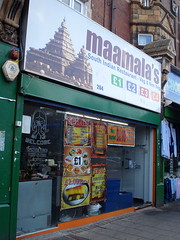 Chennai Mamalla was an early-opening South Indian restaurant in East Ham. According to Google Street View, it closed down by April 2017.

It's firmly cafe-style, with scuffed tiles on the floor and a low ceiling studded with recessed spotlights. A coin-operated massage chair takes pride of place near the entrance. There's seating for around 40 people; most of it freestanding, but there's also banquette seating along one wall. Boxes of tissues, jugs of water, and metal cups sit ready on the tables.

The menu photo is relatively short, and arranged by price — as of August 2014 everything is priced at £1, £2, £3, or £4. There are several vegetarian options, and they also do a vegetarian buffet for £3.

Kake visited on a Thursday lunchtime in August 2014. There was only one other customer when I arrived a little before 1pm, but a few others wandered in while I was there. Music was playing, not too loud.

Chapati with chicken curry (£2) photo arrived quickly. The chapati tasted fresh, and the curry had a reasonable amount of (bone-in) chicken for the price.

Kake's verdict: I'd pop in again for a quick lunch.

Accessibility: A step to get in. No further steps to the toilets, but there is a 90-degree turn which people in larger wheelchairs may find a little tight.